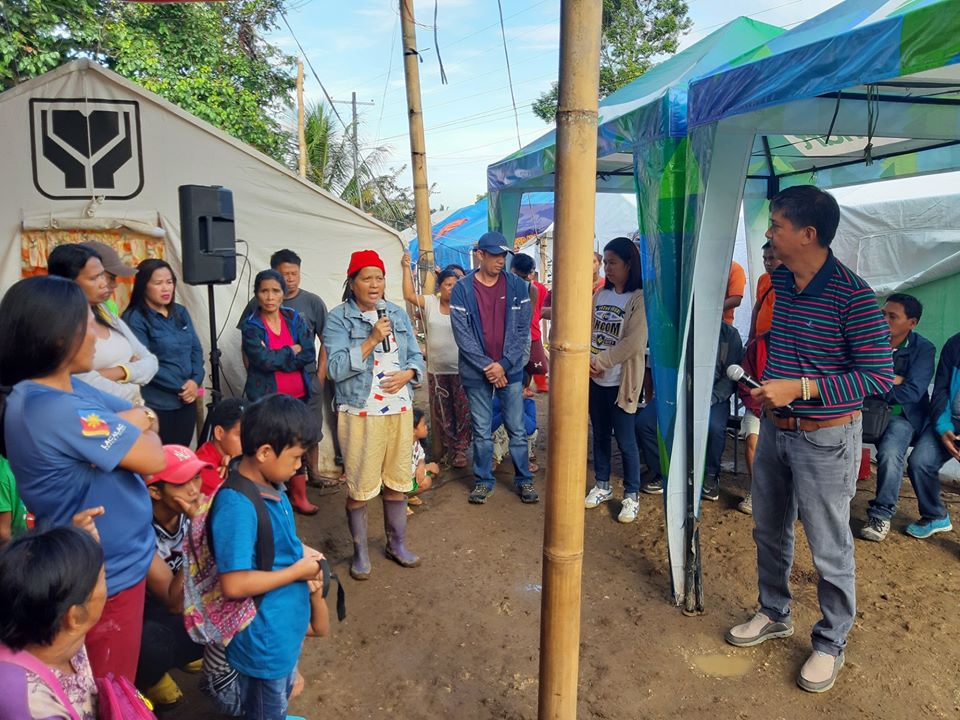 PRESS RELEASE
January 13, 2020
City Government implements Post Earthquake Rehabilitation Projects
KIDAPAWAN CITY – In just over two months since the high magnitude quakes, the City Government begins implementation of rehabilitation projects.
The City Government is in the process of consummating a memorandum of agreement with beneficiaries of the new housing units to be constructed at Resettlement Sites for earthquake displaced families.
City Mayor Joseph Evangelista revealed this as he led a consultation among affected families at the Tent City and Base camp evacuation areas situated at Barangay Ilomavis on January 10, 2020.
The City Government has partnered with the National Housing Authority in implementing the program.
Houses costing about P260,000 each are free, Mayor Evangelista assured the affected families.
For each housing unit, it will take about three (3) days to construct the concrete slabs and eight (8) hours to assemble the same.
Among the salient points included in the Memorandum of Agreement are the following: Beneficiaries are not allowed to sell, transfer, dispose or lease the house to other individuals; expansion of the house is allowed provided that it conforms to the standards set by the National Building Code; the beneficiaries will pay the monthly power and water bills and other needed improvements after the housing unit is awarded by the City Government; “One House-One Family” policy and propriety rights of owners will be respected.
Site development is already ongoing at Barangay Balabag and will commence in Barangay Ilomavis once the necessary resolutions from the Barangay Council is endorsed to the City Government.
Aside from being residents of high risk areas, beneficiaries should also be registered voters of the barangay, and included in the Community Based Monitoring System or CBMS list.
The Mayor also answered questions propounded by these families regarding the new housing units they will be receiving for free from the City Government and the National Housing Authority.
Beneficiaries were assured that the City Government will respect existing rights over home and agricultural lots situated within high risk areas but they must go back to the resettlement site within the day for their safety.
The City Government will ask the Energy Development Corporation for transportation arrangements to ferry the residents to and from the high risk areas where their farms are located to answer for necessary costs of transporting their produce for their livelihood activities. ##(cio/lkoasay)

photo caption – MAYOR EVANGELISTA CONSULTS WITH RESETTLEMENT SITE BENEFICIARIES: City Mayor Joseph Evangelista(right) listens to questions asked by evacuees at the Tent City in Barangay Ilomavis on January 10, 2020. The City Government is fast tracking the construction of houses that will serve as permanent shelters for families displaced from the October 2019 earthquakes.(cio photo)