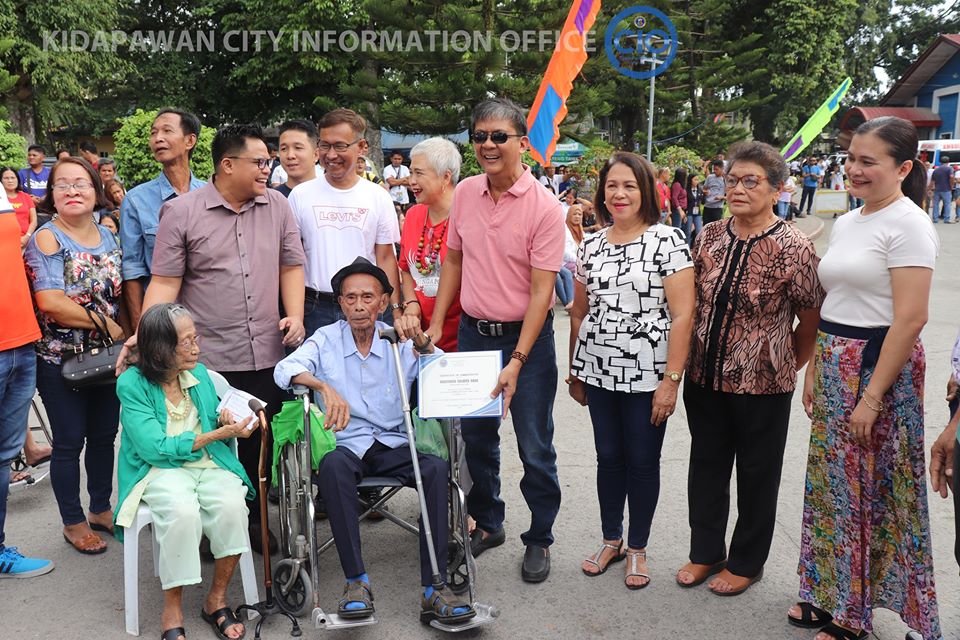 KIDAPAWAN CITY – CITY MAYOR Joseph Evangelista, Vice Mayor Jivy Roe Bombeo and City Councilors led the gift giving for two centenarians on February 7, 2020 City Government Convocation Program.
The gift giving is in recognition and appreciation of the centenarians who reached a remarkable milestone in their lives.
Each centenarian received Php 50,000 cash gift and Certificate of Commendation from the City Officials.
They are Mrs. Faustina Gaspan Costelo age 105 years old (born February 16, 1913) from Barangay Magsaysay, and Mr. Fructuoso Colares Daga age 100 years old (born January 20, 1920) from Barangay Poblacion.
Mr. Daga was accompanied by his 95 year old wife Carmen who also received a Php 3,000 cash from the City Government.
Also present during the gift giving are the children and families of the two centenarians.
When asked, their children said that the secret of their parents’ long life is a steady diet of vegetables and fruits and avoiding red meat as well as being active physically for most of their lives.
Though physically unable to do their daily routines at present, both centenarians can still communicate well with their loved ones, their families said.
The City Government has already passed an ordinance giving cash incentives to senior citizens who reached 80 years old and above, as revealed by Mayor Evangelista during the Convocation program.##(cio/lkoasay)