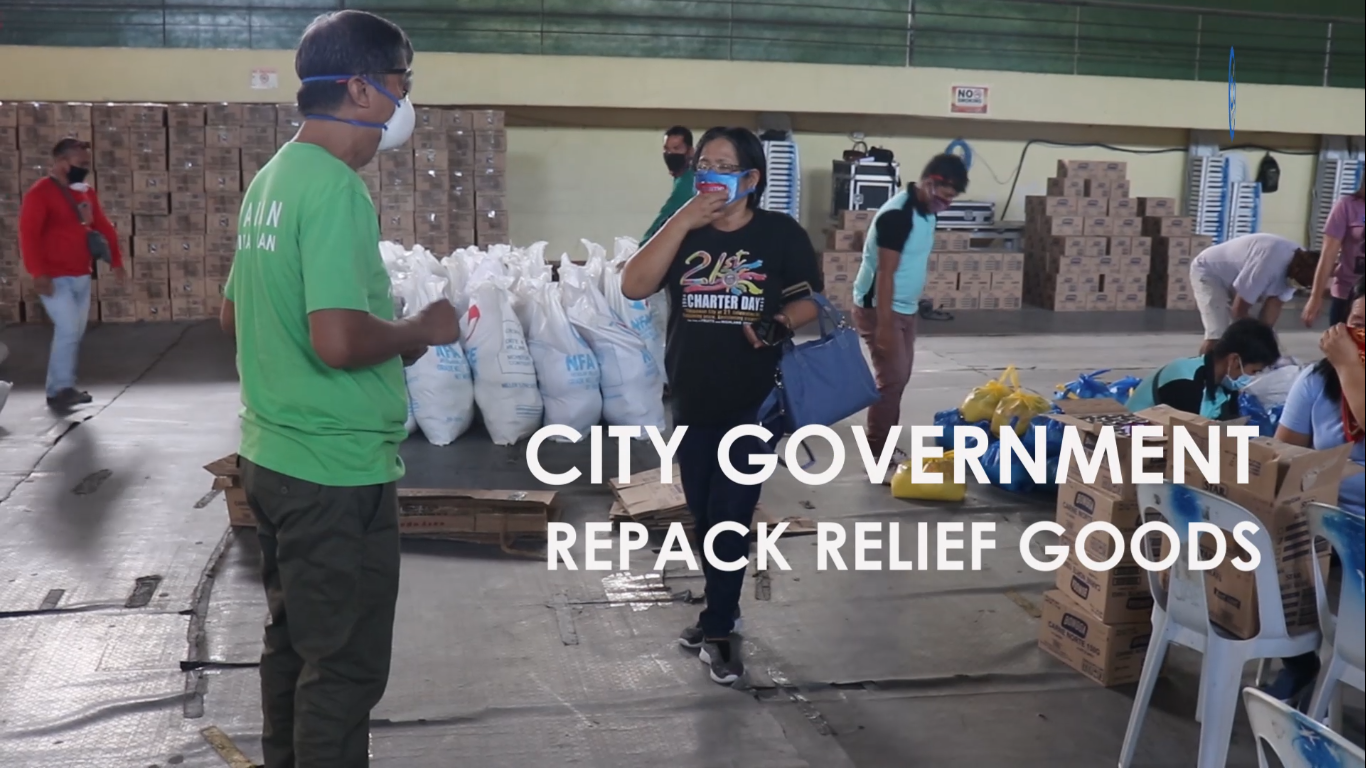 KIDAPAWAN CITY – City Mayor Joseph Evangelista personally supervised the repacking of relief items to be given to affected families undergoing home quarantine due to the threat of Corona Virus Disease 2019.

The said relief items are targeted to benefit 43,000 families under community quarantine, the Mayor said in an interview over the radio.

These consists of rice, canned sardines, corned beef and meatloaf.

City Government employees working under the skeletal workforce were recalled to help in the repacking of goods that is presently done at the City Gymnasium.

The Mayor earlier requested the National Food Authority to provide the City Government the needed rice for relief to help provide food assistance for the 43,000 families in the 40 barangays of the city.
Mayor Evangelista assured the affected families that they will receive Well Milled Rice for their sustenance during the Enhanced Community Quarantine period.

Distribution of relief items will be done by the Philippine Red Cross and the City Social Welfare and Development Office in coordination with the Barangay LGU’s.

Meanwhile, Barangay Local Government Units have already implemented their own quarantine check points along their boundaries.

The establishments of checkpoints is under Executive order number 30 s. 2020 issued by the City Mayor.

Likewise, all barangay residents are ordered to observe the 9pm-5am curfew hours, physical distancing, avoiding all forms of social gatherings and back riding in motorcycles, among others as mandated by the National Government as a prevention for the contagion.##(CIO/ajpme/lrko) 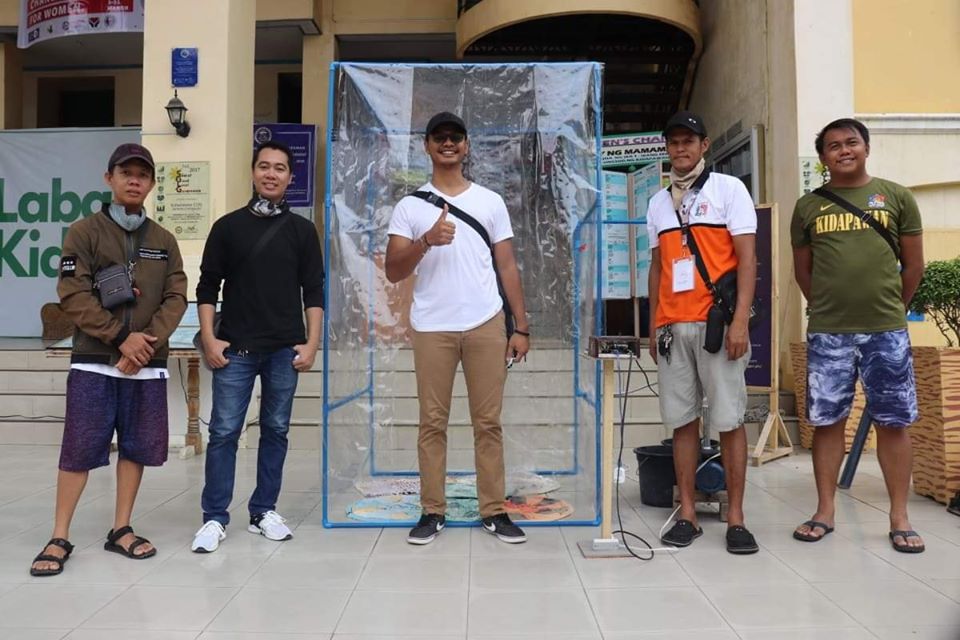 The Kidapawan Robotics Club (composed of Philip Marion Martin, Mark Julius Bula, Jayvee Orias, Elmer Dasmariñas, and Andrew Lopez Bitbit) has successfully installed an automated sanitation tent at the City Hall premises. They have offered their services for free to install additional tents like this at the City’s checkpoints. The City Government will provide the materials needed for the tents.

Truly, in this time of need, Kidapaweños have stepped up in their own way to help us in our fight against Covid-19. Laban Kidapawan! 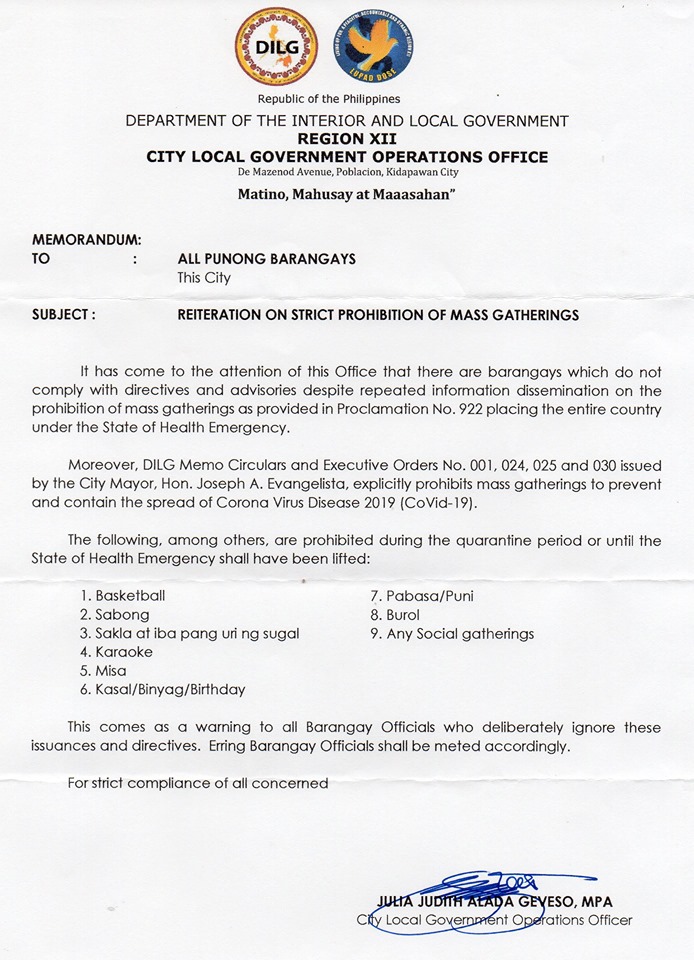 KIDAPAWAN CITY – THE CITY DILG here reiterated to barangay officials the strict prohibition of Mass Gatherings in their areas of jurisdiction as the State of National Health Emergency due to COVID19 is presently implemented.

City LGOO Julia Judith Geveso said, that there are barangays in the city that are not complying with the mandates and directives of the Department of the Interior and Local Government as well as the Executive Orders No 001, 024, 025 and 030 issued by City Mayor Joseph Evangelista that explicitly prohibits mass gatherings to prevent and contain the spread of Corona Virus Disease 2019.

The following, among others, are prohibited during the Enhanced Community Quarantine period or until the State of National Health Emergency is lifted: Basketball; Cock Fighting, all forms of gambling, Karaoke, Masses, Weddings, Baptisms, Birthdays and all forms of partying, Lenten Pabasa, Wakes, and all forms of social gatherings.

Erring barangay officials are being warned to comply the said directives or else face penalties as stipulated by law, Geveso insisted. ##(CIO/ajpme/lkro)

Blessing and formal opening of Kidapawan City PUI Facility led by City Mayor Joseph A. Evangelista. The owners of Apo Summit have offered the use of this facility rent-free. 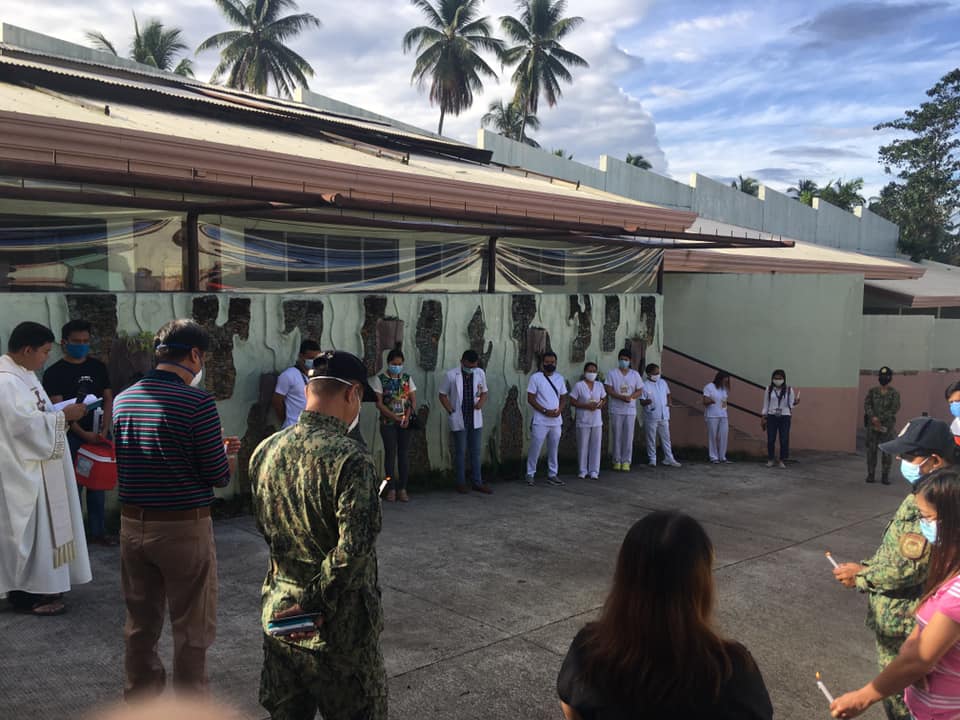 LOOK: Blessing and formal opening of Kidapawan City PUI Facility led by City Mayor Joseph A. Evangelista. The owners of Apo Summit have offered the use of this facility rent-free.

Mild PUI’s that are residents of Kidapawan City will be admitted to this facility. Led by Dr. Hamir Hechanova, the facility will be administered 24/7. Meals will be served round the clock for free, to be sponsored by the With Love Jan Foundation, Inc. A sanitation tent has also been established by the City Government at the entrance and exit points for proper disinfection. Admission shall be based on the recommendation of the CESU. 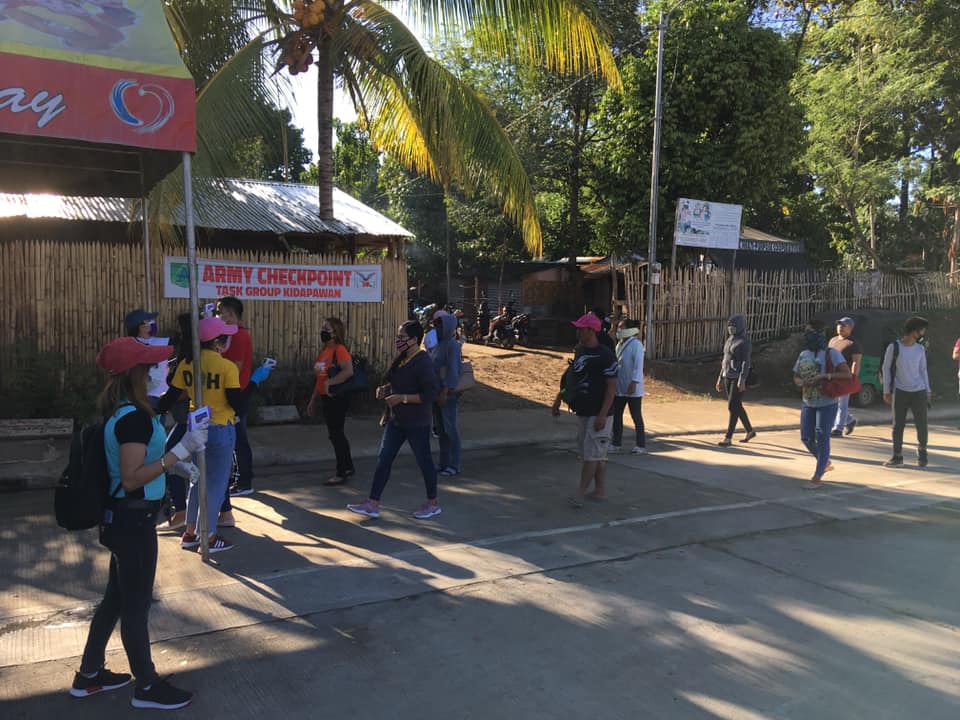 CITY EMPLOYEES IMPLEMENTING ANTI COVID19 MEASURES ALONG THE FRONTLINE TO RECEIVE COMPENSATION, FULL SUPPORT OF THE CITY GOVERNMENT
KIDAPAWAN CITY – EMPLOYEES OF THE CITY Government ordered to implement the quarantine measures against COVID19 including health workers will receive adequate compensation for their services.

Employees were tapped to speed up the quarantine measures particularly the conduct of thermal scanning of passengers and motorists as well as the disinfection of motor vehicles along entry points in the city.

They complement the limited number of health care workers initially assigned along entry points during the first day of implementation of community quarantine under Executive Order number 25 s. 2020 that was issued by City Mayor Joseph Evangelista on March 16, 2020.

Employees deployed in the front lines including health personnel, PNP and Philippine Army were provided with food and water during the duration of their services.

As an added benefit, these employees will be entitled with hazard pay from the City Government for their services rendered.

Employees were sourced out from the different offices of the City Government.

They volunteered in extending their services to help in the prevention of possible COVID19 contamination in the city.

They serve on a shifting and rotational basis for one week starting at 7am-3pm; 3pm-11pm and at 11pm-7am of the following day.

To compensate for their absence in the office, the City Government has started implementing the work from home policy for remaining employees not assigned on the field to do the anti-COVID19 measures.

Department Managers have already devised a work from home scheme for its employees as they report only on two day work schedule weekly.

A skeletal workforce was also installed to make up for the absence of employees working from home to ensure the smooth operation and the giving of services to the public of each department in the City Government.

Starting March 16, 2020, the City Government implemented the four day workweek schedule in compliance with the directive of President Duterte channeled through the Civil Service Commission.

Work in the City Government starts at 7 in the morning until 6 in the evening or beyond upon the discretion of Department Managers as the need to extend services arises.

To further protect the general public against the threat of COVID19, the City Government will only cater urgent transactions or those requiring resolutions or actions for one (1) day to three (3) days, for the time being or until the State of National Health Emergency is lifted.

Any person with urgent concern shall be submitted to the usual screening and disinfection procedures before entering the City Hall premises.

CITY GOVT EMPLOYEES SERVING ALONG COVID19 PREVENTION FRONT LINES: A number of City Government employees volunteered to serve in the front line to prevent the spread of COVID19 in the city.They will receive adequate compensation from the City Government for their services.(cio photo) 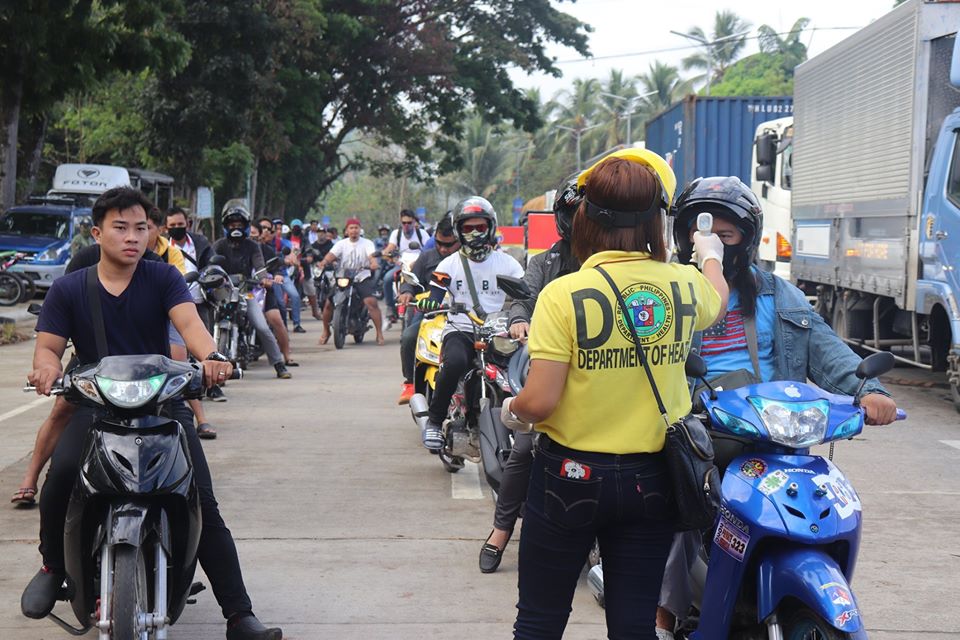 KIDAPAWAN CITY – THE CITY GOVERNMENT HERE fully implemented a Community Quarantine as a measure to prevent and contain the spread of the COVID19.

Past 7 in the morning on March 18, 2020, City Health Office personnel together with elements of the PNP and Philippine Army checked all motorists and passengers passing through the entry points of the city.

All passengers and drivers are being checked for their body temperature through the use of thermal scanners.

Passengers are ordered to disembark from the motor vehicles and made to pass through the thermal scanning stations and checked for presence of fever.

Once a passenger exceeds the 37.5 degrees body temperature, he/she will be confined to an isolation room and will undergo an intake interview.

All queuing passengers must observe social distancing to avoid possible contamination and are told to sanitize their hands with alcohol solutions and hand sanitizers provided by the health authorities.

Vehicles carrying passengers on the other hand are unloaded and disinfected.

In relation to this development, all public utility vehicles, including public buses, utility vans, jeepneys and multicabs, are prohibited to drop off passengers at any point in the City other than the KidapawanCity Overland Terminal.

There is a lockdown provision contained in EO 025, however, that calls for a prohibition of all means of private and public transportation entering Kidapawan City.

A lockdown will be implemented in the event of at least two (2) positive COVID19 cases be recorded.

An exception clause will be implemented as vehicles will be allowed entry only when it is registered and owned by residents of Kidapawan City.

In the event of a lockdown, non-residents of Kidapawan, shall be prohibited from entering the same.##(cio/ajpme/lkro)

Photo Caption – CITY GOV’T IMPLEMENTS COMMUNITY QUARANTINE:Passengers and motorists passing along the Kidapawan City – Makilala boundary are thermally scanned for presence of fever during the first day of implementation of the Community Quarantine in the city as a preventive measure against COVID19.(cio photo) 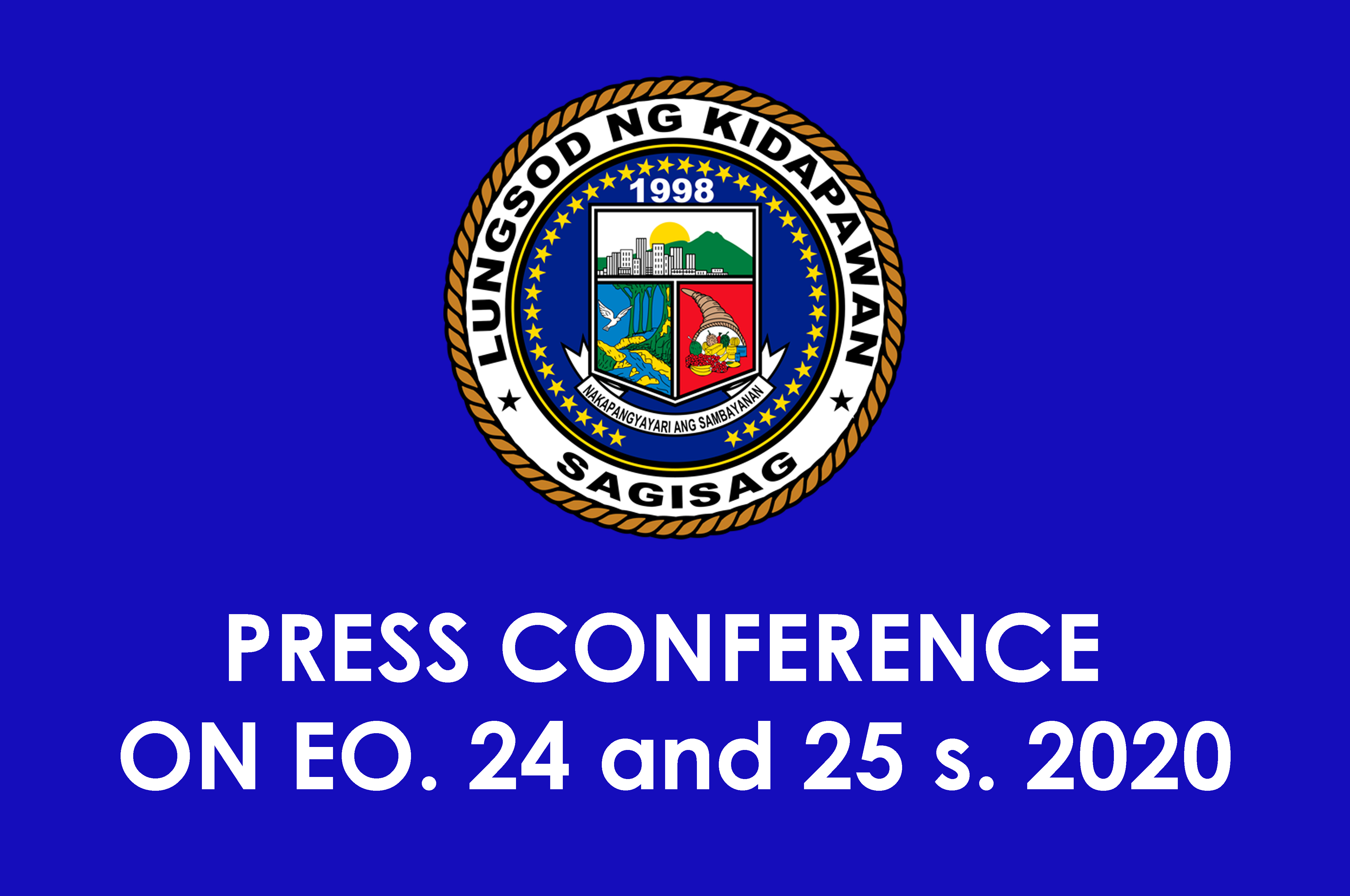 PRESS CONFERENCE on Executive Order 24 and 25 s. 2020 (An order placing the entire City of Kidapawan under Community Quarantine, providing for enforcement mechanism in furtherance thereof and for other related purposes) 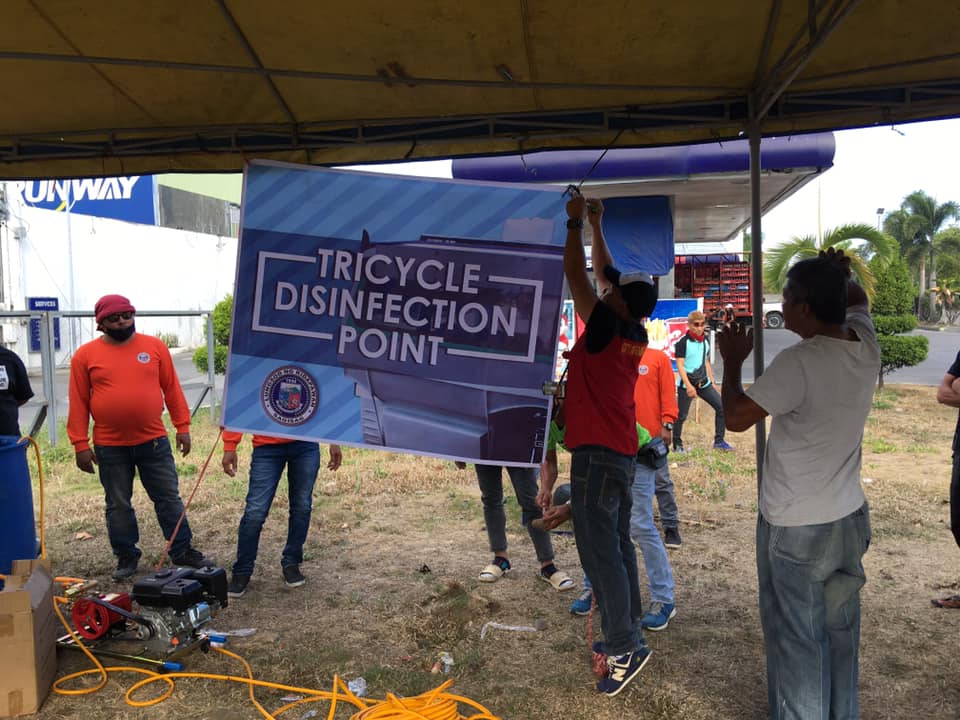 CITY GOV’T DISINFECTS TRICYCLES TO PROTECT DRIVERS/RIDING PUBLIC AGAINST COVID19
KIDAPAWAN CITY- THE City Government here started disinfecting all tricycles as a measure to protect the riding public against exposure to COVID19.

Disinfection points were set up in different locations in the city for easier access for tricycle drivers to have their units sprayed and cleaned.

On March 17, 2020, the City Government established disinfection stations for tricycles along the following areas: checkpoint entry along Quezon Boulevard near the boundary of Kidapawan City and the Municipality of Makilala, Petron Gas Station at the corner of Quezon Boulevard and Sinsuat Street, Army Check point in Barangay Magsaysay and at the portion of the lot owned by JS Gaisano along the National Highway.

Another disinfection station was added at the City Overland Terminal.

All tricycles are required to be disinfected following Executive Order no. 25 series of 2020 signed by City Mayor Joseph Evangelista on March 17, 2020.

Drivers are likewise encouraged to protect themselves from COVID19 by wearing protective equipment such as face masks when ferrying passengers.

The disinfection of tricycles will be done regularly to ensure the protection of the drivers and riding public against COVID19, the City Government said.##(cio/ajpme/lkro) 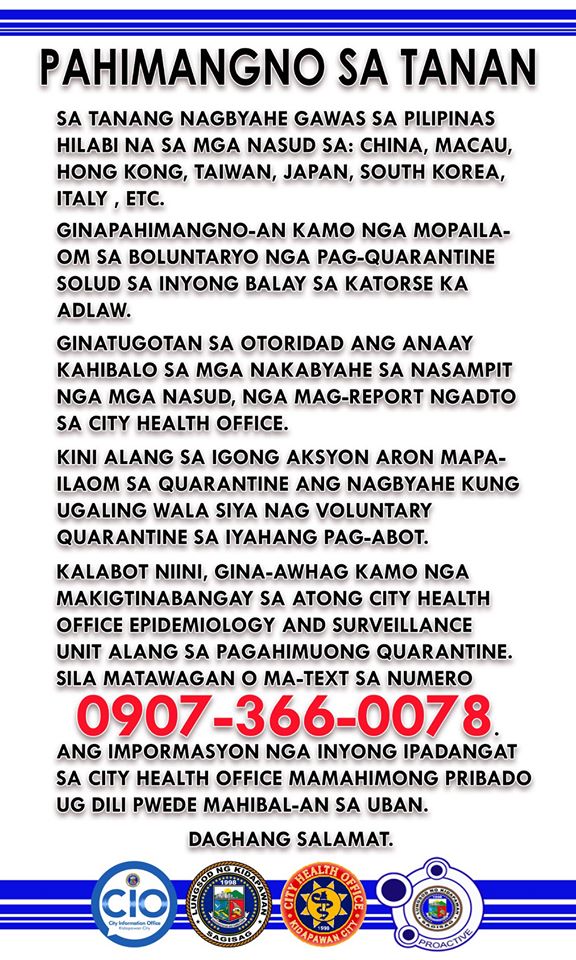 WITH PUBLIC HEALTH AND SAFETY PARAMOUNT AMONG PRIORITIES, CITY GOV’T ORDERS POSTPONEMENT OF WOMEN’S MONTH CULMINATION PROGRAM, OTHER PUBLIC ACTIVITIES DUE TO COVID19 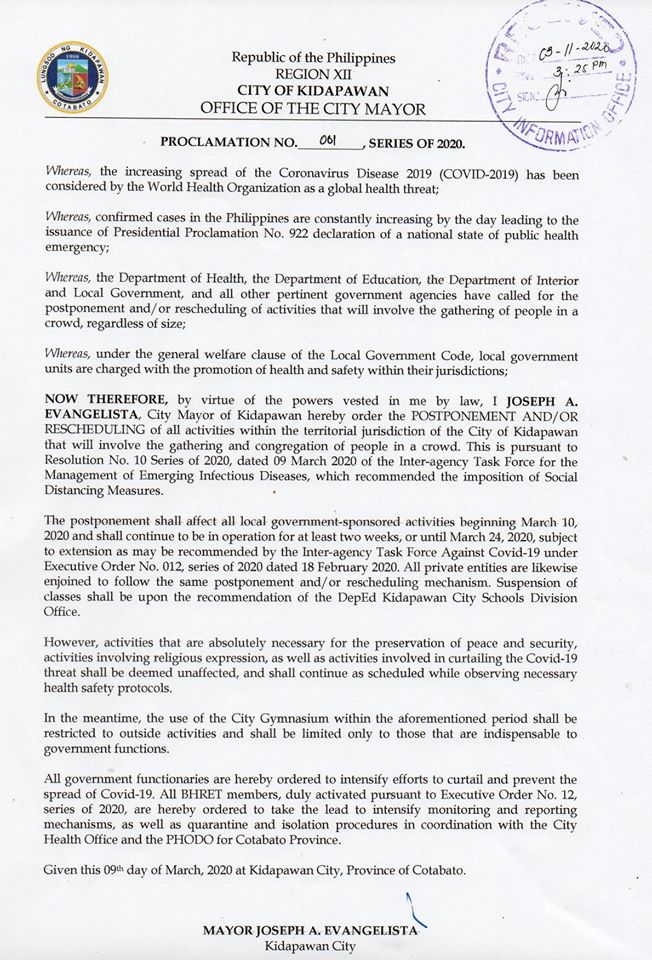 City Mayor Joseph Evangelista confirmed the postponement in a text message. “Women’s month activities are postponed. Health and safety of everyone is paramount among City Government priorities”, the mayor said.

The cancellation and re-scheduling of many of the City Government sponsored activities for this month was made after careful considerations in order to safeguard the health of the Kidapawenyos against the threat posed by the COVID19 contagion.

On March 9, 2020, Mayor Evangelista signed Local Proclamation Number 001 s. of 2020 that calls for the Postponement and/or Rescheduling of all activities within the territorial jurisdiction in the City of Kidapawan.

The postponement shall affect all local government sponsored activities beginning March 10, 2020 until March 24, 2020, subject to the extension as may be recommended by the Inter-agency Task Force against COVID19 under Executive Order No. 012, series of 2020 dated February 18, 2020.

However, activities that are absolutely necessary for the preservation of peace and security, religious expression, as well as activities involved in the curtailment of COVID19 threat shall be deemed unaffected, and shall continue as scheduled while observing necessary health safety protocols.

The Local Proclamation is also in accordance with the Presidential Proclamation 922 signed by President Rodrigo Duterte on March 9 placing the entire country under a State of Public Health Emergency following cases of local transmission of COVID19 in Metro Manila.

There are 33 COVID19 confirmed cases in the Philippines as of March 10, 2020, the Department of Health said.

In lieu of the cancellation and postponement of activities, the City Government, led by the City Information Office has intensified its information and dissemination campaign to raise more awareness on COVID19.

It will post easy-to-read and comprehensive tarpaulins printed in the local dialect this week, along identified public places in the city to remind everyone to observe proper hygiene and sanitation as well as sustaining good health practices at all times for prevention.

Likewise, the public is advised to coordinate with health authorities if there are reported cases of possible COVID19 transmission in their communities through hotline number 09073660078. ##(cio/ajpme/lkro)