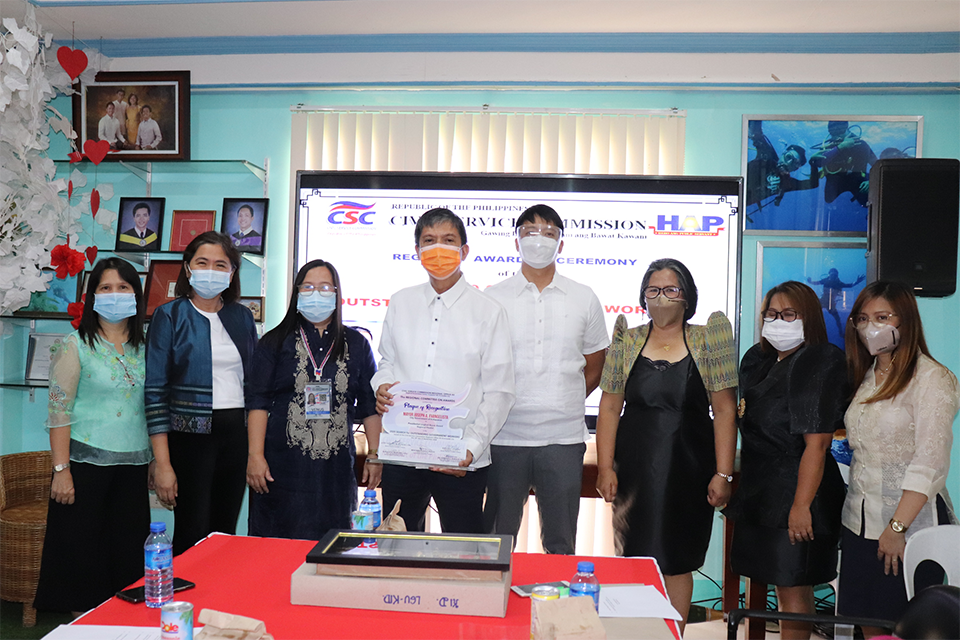 CSC 12 Assistant Regional Director Atty. Venus O. Bumanlag presented the plaque to Mayor Evangelista with the presence of CSC Cotabato Field Office Head Glenda F. Lasaga along with some key personnel at the simple awarding ceremony held at the Conference Room of the City Hall this morning.

“This award is for all the men and women of the City Government and the constituents of Kidapawan” Mayor Evangelista said upon receiving the award. He thanked everyone who has extended help and support to the programs and projects of the city government which made it more meaningful and life-changing.

Mayor Evangelista, in his message of thanks, emphasized the significance of inspiring and motivating government employees to give their best in serving the constituents and to build unity and solidarity among government workers and most especially uphold public trust and confidence.

ARD Bumanlag said that being a service-oriented, innovative, visionary and inspirational leader are some of the attributes of Mayor Evangelista that made him an outstanding public servant, thus, the CSC cited him as one of the Presidential Lingkod Bayani (PLB) Regional Awardees.

She said that notably, the City Government of Kidapawan has been a recipient of different awards and recognitions from various national government agencies such as the Department of Interior and Local Government (DILG), Department of Trade and Industry (DTI), and other offices because of the notable performance rendered by Mayor Evangelista and other local officials and for meeting or even surpassing the criteria or set of standards.

The PLB award is one of the three prestigious awards given by the CSC to government officials with exemplary performances. The other two are the CSC Pagasa Awards and Dangal ng Bayan Awards.

The 121st Anniversary of the CSC this year is highlighted by the PLB awards which aims to institutionalize excellence in public service and to give due recognition to deserving public servants.

Mayor Evangelista’s almost 9-year term as Local Chief Executive has brought development in Kidapawan City in terms of economy, peace and order, and health and social stability. Aside from this, the City Government continue to implement noteworthy programs and projects inclined to uplift the living conditions of the people especially in this time of Covid-19 pandemic. (CIO_AJPME/JCSC