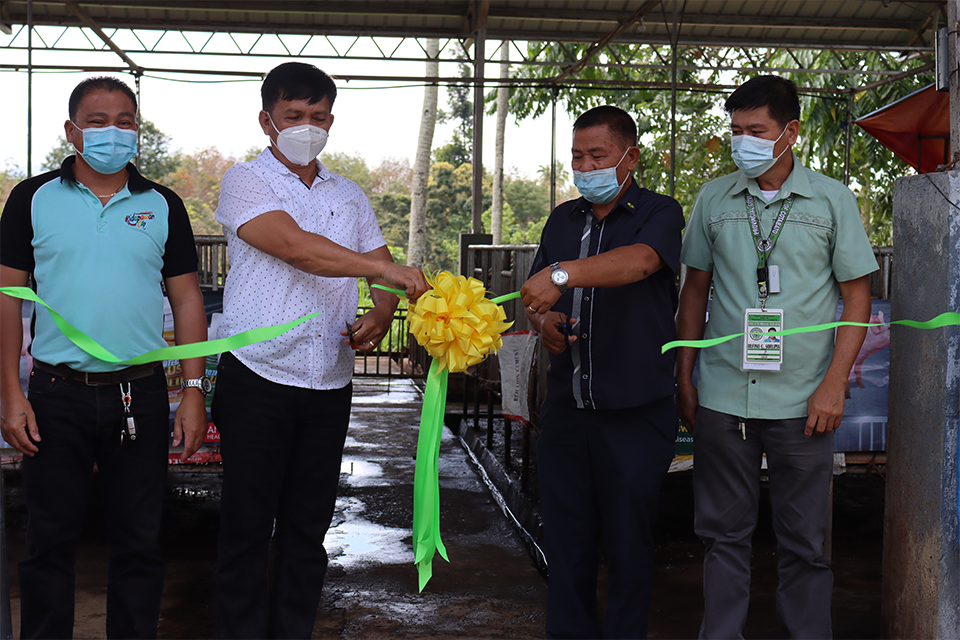 “AI sa Barangay” project can help boost supply of pork – City Vet
Kidapawan City (March 1, 2021) – The Artificial Insemination (AI) project recently
launched in Barangay Kalaisan, Kidapawan City can pave the way for hog raisers to
have superior breed of pigs and increase production of pork meat.
City Veterinarian II Dr. Ellaine Mahusay, during the launching held at Multiplier Farm,
Barangay Kalaisan highlighted the significance of AI among the many hog raisers and
piggeries in the city which can be a defining factor in recovering from the ill-effects of
the Covid-19 pandemic which has severely affected hog raisers not only in the city but
other places as well.
“Piglets attain better genetics through Artificial Insemination, less chance of being
injured as they grow and acquire other numerous benefits by performing the process to
mature female pigs and sow.” said Dr. Mahusay at the same time informing hog raisers
of the upcoming AI in other villages.
The launching was done with the opening of a new pig pen with some 10 sows given AI
with the presence of Department of Agriculture – Agricultural Training Institute12 (DA-
ATI) Center Director Abdul I. Daya-an, City Veterinarian Dr. Eugene Gornez, Kicapawan
City Councilor Engr. Peter Salac (Chairperson-SP Kid Committee on Agriculture),
Provincial Veterinarian Dr. Rufino Sorupia and stakeholders in the barangay.
For his part, Kidapawan City Mayor Joseph A. Evangelista said the effective
implementation of programs and projects for farmers badly affected by the pandemic
and African Swine Fever (ASF) is definitely what the agriculture sector needs.
“We bring the service closer to the people especially to the small farmers who have
basically nothing to rely on in these trying times” the mayor said as he thanked the DA-
ATI 12 for the partnership”,
After Barangay Kalaisan, interested and qualified hog raisers from other villages will be
visited by the City Vet for the insemination process. With this process, hog owners will
not be burdened by bringing their sows to the City Vet but only have to wait for the
personnel to come and perform the insemination.

On the other hand, Daya-an explained that the DA will continue to partner with the City
Government in terms of uplifting the status of the farmers and providing sustainable
development in agriculture.
“In this particular program, we are looking into the measures to help our farmers
particularly hog raisers to maximize their productions and consequently to address the
low supply of pork meat in the market” Daya-an said.
He also added that the “AI sa Barangay” resulted from joint efforts and collaboration of
the City Government of Kidapawan and the DA which has already implemented many
projects benefiting the farmers’ sector.
With this development, the City Agriculturist Office is looking forward for hog raisers to
achieve maximum production and potential with the help of intervention projects such as
the one held in Barangay Kalaisan and soon in other areas within the city.
Conceptualizing on the full potential and better production of hog raisers in Kidapawan
City and to stabilize the supply of pork meat in the public market, the City Government
looks forward for the eventual success of “AI sa Barangay”. (CIO_AJPME/jscj)