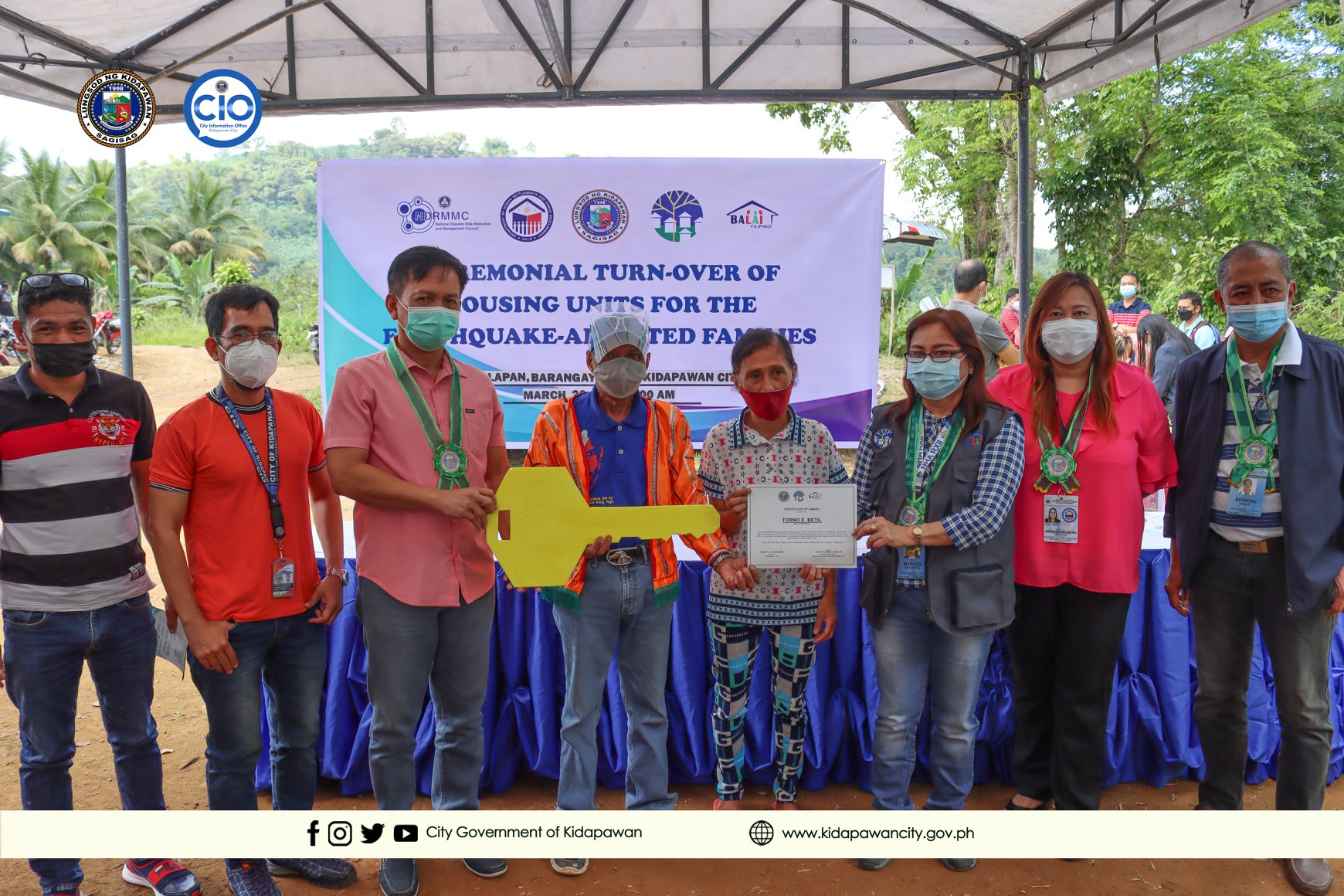 These are the Office of the Civil Defense (OCD), National Housing Authority (NHA), and the Department of Human Settlement and Urban Development (DHSUD) which have worked alongside the City Government of Kidapawan to provide houses to hundreds of families partially and heavily affected by the earthquakes last October 2019.

Each housing unit costs P280,000 with water connection already and in no time, solar connection. The housing project is being funded by the national government agencies. The City Government of Kidapawan for its part was responsible for the land acquisition and site development.

The two housing officials, along with Kidapawan City Councilor Engr. Peter Salac Co-Chairman of the Sangguniang Panlungsod ng Kidapawan City Committee on Public Works and Infrastructure and represented Kidapawan City Mayor Joseph A. Evangelista to the turn-over, Mandatory IP Representative and LAMADC Chairman Datu Radin O. Igwas, Deputy Mayor for IP affairs Datu Camilo Icdang and other heads of offices joined in the cutting of ribbon and witnessed the signing of the Memorandum of Agreement (MOA) between the beneficiaries, the corresponding agencies and the City Government of Kidapawan.

“This is the fruit or result of the efforts of the City Government of Kidapawan to help those families who have no more homes and who cannot dwell back in their places because of the earthquakes. You now have a decent house to start anew”, said Engr. Madlos.

For her part, Bretana said the City Government of Kidapawan so far is the only LGU and by far has the greatest number of houses built for earthquake victims. “I would like to congratulate each family here and at the same time thank the City Government led by Mayor Evangelista for his untiring support and commitment to help to the earthquake victims and alleviate their sufferings”, said Bretana.

In July 2020, a total of 357 housing units were turned over to earthquake victims in Barangay Ilomavis and just last February8, 2021 some 108 new houses were also turned over in Barangay Indangan, Kidapawan City, all funded by the OCD in coordination with the NHA, DHSUD and the City Government of Kidapawan.

Meanwhile, housing officials disclosed that the 50 houses turned-over in Sitio Lapan today is just the first batch of the project in the area. The second batch of new houses will be built anytime soon to accommodate the other earthquake victims that are now still temporarily residing in evacuation centers. (CIO-AJPME/JSCJ)